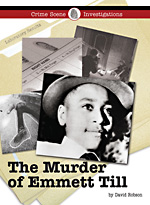 The Murder of Emmett Till, 1st Edition

The Murder of Emmett Till looks at 1955 and the investigation that led to the exoneration of Till's suspected murderers. Also looks at the reopening of the case in the early 2000s.

In 1955 a black Chicago teenager visiting relatives in Mississippi was kidnapped and brutally murdered, ostensibly for whistling at a white woman. This book focuses on the investigation that led to the acquittal of the two men accused of killing Emmett Till. Both men later openly admitted their guilt, sparking outrage that became a catalyst for the Civil Rights Movement. Also covered is a subsequent investigation in 2004, when the case was reopened and an autopsy was performed on Till's body for the first time.

"These books emphasize the teamwork involved in solving crimes and the roles that various professionals play in their investigations."--School Library Journal, September, 2010

"The bold and generous use of graphics and the wonderfully written, accessible prose in this series guarantee that it will become a high-interest, nonfiction page-turner that readers will want to take home." -- VOYA, December 2006

"This excellent resource on a popular and interesting research and outside reading topic will be a welcome addition to middle and high school libraries." -- Library Media Connection (January 2007)