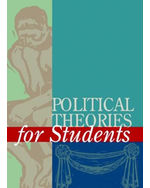 Designed specifically for high school students, Political Theories for Students provides in-depth information on major political theories and systems from all time periods. Each entry begins with a general overview of the system/theory followed by a discussion of the principal aspects of the theory, the theory's philosophy and an analysis of the historical context in which the theory was developed, including critical response. The volume also includes profiles of the major economists, philosophers, authors and others involved in the development or refinement of the theory. Entries also cover the "Theory in Action," analyzing how the political theory works in practice. Additional features include a glossary, chronology, further reading list, comparison table, more than 80 black-and-white photographs and a general index.