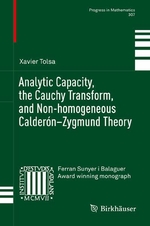 This book studies some of the groundbreaking advances that have been made regarding analytic capacity and its relationship to rectifiability in the decade 1995–2005. The Cauchy transform plays a fundamental role in this area and is accordingly one of the main subjects covered. Another important topic, which may be of independent interest for many analysts, is the so-called non-homogeneous Calderón-Zygmund theory, the development of which has been largely motivated by the problems arising in connection with analytic capacity. The Painlevé problem, which was first posed around 1900, consists in finding a description of the removable singularities for bounded analytic functions in metric and geometric terms. Analytic capacity is a key tool in the study of this problem. In the 1960s Vitushkin conjectured that the removable sets which have finite length coincide with those which are purely unrectifiable. Moreover, because of the applications to the theory of uniform rational approximation, he posed the question as to whether analytic capacity is semiadditive. This work presents full proofs of Vitushkin's conjecture and of the semiadditivity of analytic capacity, both of which remained open problems until very recently. Other related questions are also discussed, such as the relationship between rectifiability and the existence of principal values for the Cauchy transforms and other singular integrals. The book is largely self-contained and should be accessible for graduate students in analysis, as well as a valuable resource for researchers.