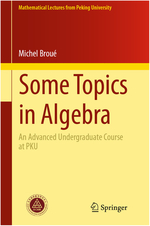 Some Topics in Algebra, 1st Edition

During the springs of 2011 and 2012, the author was invited by Peking University to give an advanced undergraduate algebra course (once a week over two months each year). This book was written during and for that course. By no way does it claim to be too exhaustive. It was originally intended as a brief introduction to algebra for an extremely pleasant and passionate audience. It certainly reflects some of the author's own tastes, and it was influenced by the feelings and the reactions of the students.Nevertheless, the result covers some advanced undergraduate algebra (rings, ideals, basics of fields theory, algebraic integers, modules, hom and tensor functors, projective modules, etc.) illustrated by numerous examples, counterexamples and exercises. Following a worldwide tradition, the author had planned to conclude by lecturing on the structure of finitely generated modules over principal ideal domains. But during the course, after explaining that the notion of projective modules is more natural than the notion of free modules, it became clear that principal ideal domains needed to be replaced by Dedekind rings; this is much less traditional in the literature — but not more difficult.