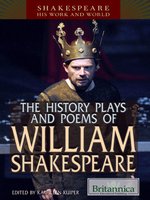 The History Plays and Poems of William Shakespeare, 1st Edition

Before Shakespeare, few dramatists had used historical figures as characters in a play, or actual historical events as elements of a plot. Likewise, the Bard was a pioneer of the sonnet, which he took to new heights. Both literary form, including his two historical tetralogies, and his narrative poems, in addition to the particular form of sonnet that now bears his name are examined through engaging text. A brief treatise on the music within and accompanying productions of Shakespeare’s plays rounds out the coverage.