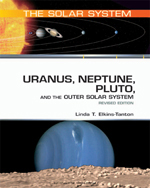 Unlike all the planets closer to the Sun, known since antiquity, the farthest reaches are the discoveries of the modern world. Uranus was discovered in 1781, Neptune in 1846, Pluto in 1930, the Kuiper belt group of objects in 1992, and though the Oort cloud has been theorized since 1950, its first member was found in 2004. The discovery of the outer planets made such an impression on the minds of mankind that they were immortalized in the names of the newly discovered elements: uranium, neptunium, and plutonium, an astonishingly deadly constituent of atomic bombs.