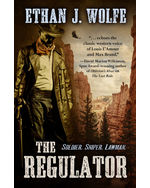 Murphy answers only to the President. His latest assignment comes from President Garfield and is classified Top Secret. A serial killer is murdering railroad workers and settlers in the western states and territories.

With nothing but his skill as a hunter and his knowledge of the budding science of forensics‚ Murphy begins a quest that takes him through a thousand miles of the west as he searches for the man responsible for dozens of murders.