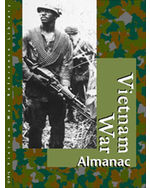 Officially originating in 1941 when a Vietminh guerrilla force was formed under Ho Chi Minh and ending in May 1975 with the fall of Saigon, the Vietnam War took a heavy toll on American troops and greatly affected the political atmosphere of the late 60s and early 70s. Vietnam War: Almanac highlights the major events leading up to and during America's involvement in the war that created great political tensions on the home front: