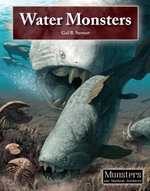 Since ancient times people have told stories about otherworldly beings that roamed the depths of oceans, lakes, and rivers. Some were beautiful and dangerous, like the mermaids and sirens that tried to lure sailors to their deaths. But most were hideously terrifying, with teeth, claws, or tentacles that could kill and devour even the largest ships. Even in the twenty-first century, many people (including some scientists) believe that some of these water monsters still exist, and swear that they have had close and sometimes very dangerous--encounters with them.

Front Cover.
Copyright Page.
Contents.
Introduction: Monsters Among Us?.
1: From the Ocean’s Depths.
2: Mer-People.
3: The Monster in Loch Ness.
4: Beasts in the Lakes.
5: On the Trail of Water Monsters.
Source Notes.
For Further Exploration.
Index.
Picture Credits.
About the Author.