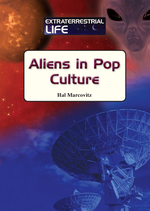 For centuries, people have wondered about life on other planets but most aliens did not start showing up in literature and other forms of pop culture until the late 19th century. Since then, aliens have become familiar characters in books, films and video games. Given their overwhelming popularity, visitors from other worlds are sure to be featured in pop culture for many years to come.

Front Cover.
Copyright Page.
Contents.
Introduction: The Enduring Popularity of Extraterrestrials.
1: The Aliens Arrive.
2: They Come to Conquer.
3: They Come in Peace.
4: Off-World Encounters.
5: Aliens Among Us.
Source Notes.
For Further Exploration.
Index.
Picture Credits.
About the Author.