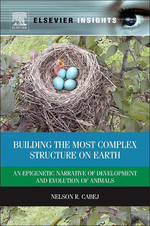 Building the Most Complex Structure on Earth, 1st Edition

Front Cover.
Half Title Page.
Title Page.
Copyright Page.
Dedication.
Table of Contents.
Preface.
1: Control Systems in the Living World.
2: Epigenetics of Reproduction in Animals.
3: Epigenetic Control of Animal Development.
4: Living and Adapting to Its Own Habitat.
5: Rise of the Animal Kingdom and Epigenetic Mechanisms of Evolution.