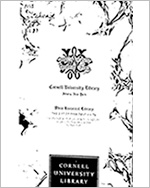 Witchcraft in Europe and America

Witchcraft in Europe and America is a comprehensive collection offering a wide range of writings on the subject of witchcraft. As such, it affords scholars an invaluable opportunity to explore this intriguing historical phenomenon from a variety of perspectives. Included are many rare and fragile manuscripts containing eyewitness accounts and court records of the trials of witches, including harrowing original manuscript depositions taken from the victims in the torture chamber.

These documents, in both original manuscript and in print, reveal the harsh outcome of the more remote doctrinal disputes. Perhaps the most significant of all manuscripts in the Witchcraft collection is the minutes of the witchcraft trial of Dietrich Flade, a sixteenth-century city judge and rector who spoke out against the cruelty and injustice of the persecutions in the 1580s.

The pronouncements of advocates of witch persecution -- Binsfeld, Boguet, Del Rio, Remi -- can be compared and contrasted to the courageous warning of Bekker, Löher, Loos, Scot, Spee -- men who doubted the validity of witch believers and witch trials. Also, numerous dissertations and limited printed works examining theological, legal, social implications of witchcraft are reproduced in their entirety.

This collection unlocks much more than the world of witchcraft alone; spanning the 15th to 20th centuries, it also enables researchers to trace the history and culture of European civilization during the Renaissance and Enlightenment. The majority of texts are in Latin, English and German, although there are also selected items in French, Italian, Portuguese, Danish, Dutch and Spanish.