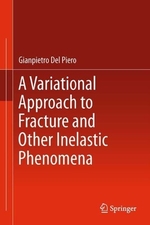 A Variational Approach to Fracture and Other Inelastic Phenomena, 1st Edition

This book exposes a number of mathematical models for fracture of growing difficulty. All models are treated in a unified way, based on incremental energy minimization. They differ from each other by the assumptions made on the inelastic part of the total energy, here called the 'cohesive energy'. Each model describes a specific aspect of material response, and particular care is devoted to underline the correspondence of each model to the experiments.  The content of the book is  a re-elaboration of the lectures delivered at the First Sperlonga Summer School on Mechanics and Engineering Sciences in September 2011. In the year and a half elapsed after the course, the material has been revised and enriched with new and partially unpublished results. Significant additions have been introduced in the occasion of the course 'The variational approach to fracture and other inelastic phenomena', delivered at SISSA, Trieste, in March 2013. The Notes reflect a research line carried on by the writer over the years, addressed to a comprehensive description of the many aspects of the phenomenon of fracture, and to its relations with other phenomena, such as the formation of microstructure and the changes in the material's strength induced by plasticity and damage.Reprinted from the Journal of Elasticity, volume 112, issue 1, 2013.