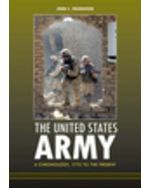 The United States Army: A Chronology, 1775 to the Present, 1st Edition

The United States Army: A Chronology, 1775 to the Present captures the full sweep of the U.S. Army's place in our nation's history. Its series of concise, yet highly informative, entries cover all important events involving American ground troops -- both successes and failures, in wartime and in peace -- from the American Revolutionary War to the present.

In a basic chronological format anchored to specific dates, The United States Army reports on all significant military engagements -- major conflicts and isolated actions -- but goes well beyond the battlefield to include significant political and administrative changes affecting the military, notable events in the careers of generals and soldiers, significant military texts, the foundation of noted schools of instruction, and military minutae such as pay scales and creation of a general staff. Coverage also extends beyond the regular army to include auxiliaries from the colonial militias to today's National Guard, Reserves, Army Aviation, and Special Forces.