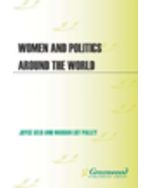 Women and Politics around the World: A Comparative History and Survey, 1st Edition

Women have made some progress toward equal political representation in the United States and around the world, but true equality may be a long way away. Though women represent more than half of the world's population, they account for only 15 percent of its elected officials, and their particular concerns often go unaddressed in the political arena.

Women and Politics around the World divides its coverage into two volumes. The first looks at such crucial issues facing women today as health policy, civil rights and education, comparing conditions around the world. The second volume profiles 22 different countries, representing a broad range of governments, economies and cultures. Each profile looks at the history and current state of women's political and economic participation in a particular country, and includes an in-depth look at a representative policy. The result is a resource unlike any other - one that gives students, researchers, and other interested readers a fresh new way of investigating a truly global issue.

Front Cover.
Half Title Page.
Title Page.
Copyright Page.
Dedication.
Contents.
Preface.
Introduction: Perspectives on Women in Nations in a Globalized World.
About the Contributors.
1: Some Theoretical Perspectives on Women in the Modern World.
2: Women and Globalization.
3: Political Development and Women's Status around the World.
4: Economic Development and Women.
5: Education for Women in Comparative Perspective.
6: Candidate Gender Quotas.
7: Sexual Rights as Human Rights: Resituating Feminist Analysis of Sexual Violence in Wartime.
8: Carrying the World on Her Back: Reproductive Health, HIV/AIDS, and Women's Rights.
9: Breast-Feeding Practices, Policies, and Politics in a Global Context.
10: Political Pathways to Child Care Policy: The Role of Gender in State-Building.
11: Violence against Women.
12: Trafficking and the International Market in Women and Girls.
13: Women and Microfinance.