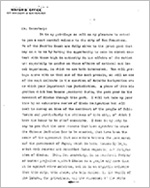 The Hindu Conspiracy Cases: Activities of the Indian Independence Movement in the U.S., 1908-1933

During World War I, Indian nationalists used Great Britain's preoccupation with the European war to attempt to foment revolution in India to overthrow British rule. Their activities were aided politically and financially by the German government. Indian nationalists in the United States were active in the independence movement effort through fund-raising, arms buying, and propagandizing through the Hindustan Ghadar newspaper published in San Francisco.

The Justice Department and U.S. Attorney records within The Hindu Conspiracy Cases: Activities of the Indian Independence Movement in the U.S., 1908-1933 primarily concern the U.S. government's prosecution of these nationalists in the "Hindu Conspiracy Case" (as it was called in the press and Department of Justice correspondence) for violations of the Espionage Act (40 Stat. 217-231) arising from two major incidents. In the first incident, the German government provided funds with which the nationalists purchased arms for shipment to Indian rebels. In the second incident, several Indians (some of whom were U.S. citizens) and others were arrested for attempted fraud involved in soliciting funds for and calling themselves representatives of the "Nationalists Government" of India. In the spring of 1918, the "Hindu Conspiracy Case" trial was held in San Francisco, at which 29 people were convicted in indictments arising from the arms shipment. Indictments arising from the fraud case were dismissed. The trial ended with a sensational climax when Ram Chandra was shot to death in the courtroom by fellow defendant, Ram Singh.