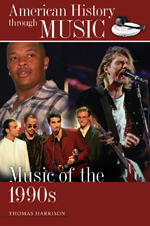 Techno, rap, hip hop, grunge, alternative rock, bubblegum rock, boy bands, and contemporary country. As with all decades before, popular music in the 1990s was marked by change and continuity alike. Show music changed too, as did classical compositions. Now there's a one-stop source that captures developments in all these genres and more. During the 1990s, musical genres became more commercialized than ever--and that was just one of the many changes that characterized the decade. Music of the 1990s offers a detailed and wide-ranging view of the important music of the '90s, identifying the artists and the important compositions--popular, classical, and jazz--that helped shape the period. The book focuses on key artists in specific genres in popular music, including pop, hard rock/heavy metal, rock, and country. Specialized genres are examined as well, in a chapter that discusses prominent artists and composers in musical theater, jazz, popular Christian music, and classical music. Among other topics, the book looks at the growth of urban-based rap and other popular music in the context of the rise of music television. Hard rock and heavy metal are also examined within the music video idiom. New trends in mainstream rock and country music are explored as well.