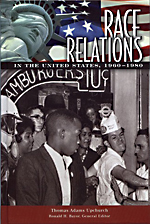 Few decades in American history were as full of drama and historical significance as the 1960s and 1970s. In the 1960s, a revolution in race relations occurred, seeing the rise of the Civil Rights Movement, Black Power, the American Indian Movement, and the Latino labor movement. The focus in the 1970s was on carrying out the reforms of the previous decade, with resulting white backlash. Few decades have interested students today as much, and this volume is the content-rich source in a desirable decade-by-decade organization to help students and general readers understand the crucial race relations of the recent past. Race Relations in the United States, 1960-1980 provides comprehensive reference coverage of the key events, influential voices, race relations by group, legislation, media influences, cultural output, and theories of inter-group interactions.