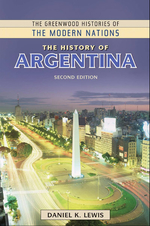 The History of Argentina, 2nd Edition

This second edition of The History of Argentina provides a broad overview of the country's cycles and changes with emphasis placed on the political and economic events that shaped the last five decades. Now updated to include additional information regarding recent developments in the Peronist faction that remains in power but continues to face old rivals and new threats, the book offers an introductory survey that features a general overview of key eras, events, trends, and individualsThe content covers a wide range of topics, including the impact of state-sponsored industrial growth since 1945; Spanish settlement and colonization; the Wars of Independence; Argentina's "mother industries," ranching and grain farming; immigration during the late 19th century; Argentina's economic "Golden Age" of 1880-1910; democratic reform in the early 20th century; Argentina in international trade; and Argentina's rivalries with Brazil and the United States.