The conflict between Christian and Moslem, which is a dominant and recurring theme throughout Syria's history, presented the Mission with a diversity of problems unknown in other mission fields. The division of the population along religious lines resulted in internecine warfare throughout Syria/Lebanon. This had an unsettling effect on the Mission's educational, medical, and evangelistic work. Despite this turmoil, the Mission was able to effect progress, especially in the area of educational and medical assistance. Schools and medical work were a part of the Christian enterprise in Syria throughout the Mission's history. The work of the Presbyterian Church in Syria was conducted through four main stations. These included Beirut, occupied in 1823; Tripoli, opened in 1848; and Sidon, occupied in 1851. The last station, Aleppo, was opened by the Board of Foreign Missions in 1920. In addition to these 4 stations and their 63 outstations, there were several substations. Suk-el-Garb, started by the American Board in 1848, was part of the Beirut station, as was Zahleh. Hama and Deir-ez-Zore were both substations of the Aleppo station. The work of the Syria Mission transcended three distinct states: Lebanon, which encompassed the stations of Beirut, Tripoli, and Sidon and the substation of Zahleh; Latakia, where the Mission performed limited work in certain villages; and Syria, where work was conducted in the cities of Hama, Aleppo, and Deir-ez-Zore. The records of the Board of Foreign Missions provide invaluable information on social conditions in Greater Syria (and Lebanon) and on efforts to spread the gospel during the nineteenth century. Documenting the church’s educational, evangelical, and medical work, these records are mainly of incoming correspondence from the mission field and outgoing correspondence from the Board headquarters. 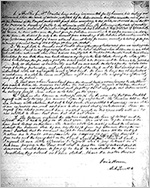