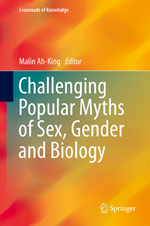 This edited volume challenges popular notions of sex, gender and biology and features international, trans-disciplinary research. The book begins with an exploration of supposedly 'natural' sexual differences, then looks at research in evolutionary biology and examines topics such as gender stereotypes in humans.The first chapters explore important questions: What are the fundamental sex differences? How do genes and hormones influence an individual's sex? Subsequent chapters concern topics including: sex stereotypes in the field of sexual conflict, how the focus on genes in evolutionary biology disregards other means of inheritance, and the development of Darwin's theory of sex differences.The last three chapters look at humans, discussing: an interdisciplinary approach to the evolution of sex differences in body height, biological versus social constructive perspectives on the gendering of voices and nature-culture arguments in the current political debate on paternity leave in Norway.

Front Cover.
Other Frontmatter.
Title Page.
Copyright Page.
Contents.
Contributors.
1: Introduction.
2: Fundamental Differences Between Females and Males?.
3: Genes and Hormones: What Make Up an Individual’s Sex.
4: Sexual Conflict and the Dilemma of Stereotyping the Sexes.
5: Sex, Gender, and Evolution Beyond Genes.
6: Beyond Coy Females and Eager Males: The Evolution of Darwin’s Sexual Selection.
7: Human Sex Differences in Height: Evolution due to Gender Hierarchy?.
8: How Do Voices Become Gendered? A Critical Examination of Everyday and Medical Constructions of the Relationship Between Voice, Sex, and Gender Identity.
9: Parenthood in Norway: Between Politics and Science.
About the Authors.