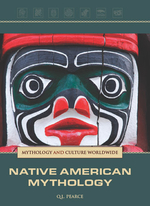 This new volume in Lucent's Mythology and Culture Worldwide series looks at Native American mythology, draws connections between Native American culture and its myths, and explains how the beliefs, values, and experiences of that culture are represented in its treasured stories. Tales covered include earth diver and origin stories, and myths of culture heroes, nature deities, spirits, and tricksters. This volume has a map of the tribal regions of North America, a table of major characters with name pronunciations and brief descriptions, a glossary, sidebars, fact boxes, a bibliography of sources for further study, and a subject index.