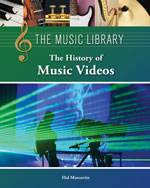 The first official music videos aired in the 1970s, but the seeds for making music something more than a pleasure for the ears were planted decades earlier. This book covers the birth of the music video, starting in the 1920s and 1930s when the first great movie musicals were produced, then details how MTV revolutionized the industry by making the film production as important as song production. The author also explains the various music video styles and differences in production value. Concluding chapters highlight the Internet video sensations of today and the interactive features that will likely characterize the genre tomorrow.