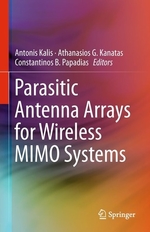 This book unites two different technologies: parasitic antenna arrays driven via analogue circuits that control the electromagnetic waves generated by the antenna array; and MIMO technology for multi-antenna arrays, typically driven by digital techniques in the baseband domain. The combination of these two technologies has revealed a novel functionality that breaks through the conventional MIMO paradigm, allowing MIMO transmission over the air with the use of antenna arrays that may consist of only a single active element, that is surrounded by a number of passive neighboring antennas. The contributions in the book show the capability of such systems to also perform MIMO transmission. This fact holds the potential of revolutionizing the way small-form wireless terminals operate and seems to set the scene for a win-win situation, achieving MIMO transmission with very small and cheap antenna arrays. The book is structured to provide a well-rounded treatment of the various facets of this newly discovered wireless communication capability. All relevant technical angles, ranging from information theoretic to electromagnetic considerations; from analogue circuit to digital baseband control for signal generation; and from channel modeling to communication theoretic aspects are taken into account. A good balance between theory, practical considerations and over-the-air experimentation is proposed and reflected in the chapter outline. Finally, a discussion and early evidence related to potential applications as well as the relevance to current and upcoming wireless standards is provided.