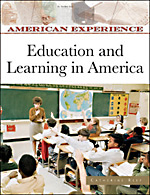 As the colonies rebelled from Britain, their initial reliance on European educational models and philosophies was replaced by a greater focus on the Enlightenment, republicanism, and the influence of such prominent Americans as Thomas Jefferson, Benjamin Franklin, Benjamin Rush, and Noah Webster. From this developed a system of public education, extending education to Americans previously excluded from private academies and secondary schools. In recent years, there has been a movement away from progressivism and a return to traditionalism as studies demonstrate increasing illiteracy rates of students in the United States versus those of other industrialized nations. Education and Learning in America examines the progress and development of education throughout U.S. history - from the changing theories of education and the differences between urban and rural education to the movements of progressivism and traditionalism to standardized testing. Focusing on specific issues facing African Americans, American Indians, and immigrants seeking education, this volume presents both the voices of those establishing educational policy and learners as well as facts and figures on education in the United States.

Each chapter begins with a narrative section that chronicles the experiences of learners and educators in this country, followed by a chronology of events that highlight important dates. Eyewitness testimonies - including passages from William Penn, Grace Abbot, and James Meredith, as well as hundreds more - provide hundreds of firsthand accounts of individuals' experiences. Appendixes provide concise biographies of 61 important individuals, as well as primary source documents, either full text or excerpts; a glossary; appendixes; maps; graphs and tables; notes; a thorough bibliography; and an index. More than 85 black-and-white images portraying the American education experience round out this in-depth resource.