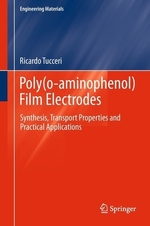 This review book is concerned with the synthesis, charge transport properties and practical applications of poly (o-aminophenol) (POAP) film electrodes. It is divided into three parts. The first one has a particular emphasis on problems of synthesis and structure of POAP. The second part deals with the mechanism of charge transfer and charge transport processes occurring in the course of the redox reactions of POAP. The third part describes the promising applications of POAP in the different fields of sensors, electrocatalysis, bioelectrochemistry, corrosion protection, among others. This review covers the literature on POAP in the time period comprised between 1987 and 2013.