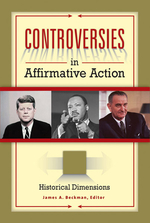 This comprehensive, three-volume set explores the ways the United States has interpreted affirmative action and probes the effects of the policy from the perspectives of economics, law, philosophy, psychology, sociology, political science, and race relations. Expert contributors tackle a host of knotty issues, ranging from the history of affirmative action to the theories underpinning it. They show how affirmative action has been implemented over the years, discuss its legality and constitutionality, and speculate about its future. Volume one traces the origin and evolution of affirmative action. Volume two discusses modern applications and debates, and volume three delves into such areas as international practices and critical race theory. Standalone essays link cause and effect and past and present as they tackle intriguing-and important-questions. When does "affirmative action" become "reverse discrimination"? How many decades are too many for a "temporary" policy to remain in existence? Does race- or gender-based affirmative action violate the equal protection of law guaranteed by the Fourteenth Amendment? In raising such issues, the work encourages readers to come to their own conclusions about the policy and its future application.