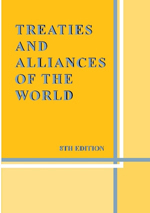 Treaties and Alliances of the World, 8th Edition

Treaties and Alliances of the World is an invaluable reference guide to the vast array of agreements that underpin the international system of relations between states of the world. Covering everything from major treaty-based international and regional organizations like the IMF, NATO, and the EU to less familiar bodies in areas such as scientific cooperation or agricultural commodities, Treaties and Alliances is an invaluable stand-by for anyone carrying out research, or having to answer queries, in government, academia, the media, and all institutions with an involvement in the study or practice of international relations.

This 7th edition is fully updated and covers activities of hundreds of international and regional organizations and the details of all significant bilateral treaties. Also included is expanded coverage of:

"This volume, which first appeared in 1968 and is now in its 7th edition, continues to be an excellent reference for the major international, regional, and bilateral agreements of various kinds throughout the world. It purports to provide a source for both quick checking of basic facts and for more extensive research on a particular topic...Because it contains so much useful information and is written in a readable style—particularly noted in sections on the wars in Afghanistan and Iraq—this volume is highly recommended for academic and large public libraries." --ARBA (2004)

"The book is well written and easy to read and covers information that is difficult to find in many libraries. The book should be in all libraries that have an international focus, particularly political science and all general purpose libraries where people are looking for information on world treaties."--ARBA, March 2009