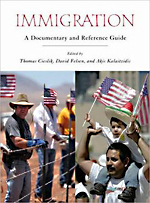 The uncomfortable contemporary realities of immigration, enmeshed as they are in economic, human rights, and national security issues, have once again propelled foreign immigration to the United States toward the top of the list of U.S. domestic policy concerns. Three respected authorities on immigration and international affairs here present a carefully calibrated history of U.S. immigration in primary source documents, tracing the roots of the current debate in the history of our profoundly divided and surprisingly cyclical response to foreign immigration. This book documents this national ambivalence, identifying the major waves of immigration and clarifying the ways in which the existing social and political fabric conditioned both the response to the newcomers and their prospects of eventual integration into American society.