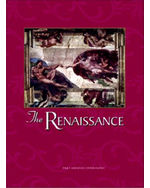 The Renaissance: An Encyclopedia for Students, 1st Edition

Based on the Dartmouth Medal--winning Encyclopedia of the Renaissance (2000), this set has been prepared especially for non-specialists, focusing on the Renaissance-era topics most studied in high school: world history, art, literature, economics, and science curriculum. Organized alphabetically, this illustrated, full-color set includes entries on a range of topics, including: Florence, Galileo, Heraldry, Humanism, Medici family, Opera, Piracy, Rhetoric, Shakespeare, Spanish Armada, Leonardo da Vinci, and many others. Features include a master chronology with topical timelines; a bibliography with age-appropriate further reading sources; and a comprehensive index. While Gale strives to replicate print content, some content may not be available due to rights restrictions. Call your Sales Rep for details.

"This heavily illustrated four-volume set is a derivative student edition based upon the more comprehensive Encyclopedia of the Renaissance issued in 1999 under the direction of the same editor...Individual entries are quite readable and are provided with marginal definitions of works that may be unfamiliar to the student, as well as references to related articles."--ARBA (2004)

"Apart from omissions, Grendler's encyclopedia provides wide-ranging coverage of an important period at a level appropriate to undergraduates and high school students. Summing Up: Recommended. Undergraduate collections." --Choice (May 2004)

"This accessible, well-organized work is based on the Encyclopedia of the Renaissance (Scribners, 2000)...The pleasing layout features entry words highlighted in blocks of gold tones and a decorative border that runs across the top of each page. Researchers should find their needs more than satisfied by this appealing and student-friendly resource."--School Library Journal (April 2004)

"Scribner's has taken its six-volume Encyclopedia of the Renaissance (1999) and adapted it to produce this four-volume resource for middle and high-school students. The entries are arranged alphabetically and feature events, people, places, monuments, and idea current between 1350 and 1620. Definitions of terms are provided in the left margin of the entries. The volume also includes maps, tables, boxes with short descriptions of concepts, and b&w illustrations. Four series of color plates are included, on art and architecture, daily life, the city, and new frontiers. Separate entries summarize art in countries of Britain, Central Europe, France, Germany, Italy, the Netherlands, and Spain and Portugal. Volume four contains a bibliography, organized by subject, of academic sources as well as some books for young readers." --Art Book News Annual, 2005

"...still plenty of good maps and other illustrations as well as cross-references. Significant but possibly unfamiliar words in essays are asterisked with brief definitions in the margins. Essays reflect recent scholarly interest in popular and demographic history, as well as standard biographical and political topics. Each of the volumes has an index to the entire set, a helpful feature. The length and level of the biographical essays seem to be very similar to comparable biographies in the World Book. Far more useful are the thematic articles, such as Literature or Technology, that restrict these broad topics to their significance during the Renaissance. The scholarly authority of the original work, the essays¿ focus on the period, and the range of subjects all make this a title that large high school libraries could consider for history students."--Catholic Library World (June 2004)