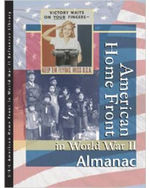 Unlike other resources, which often focus on the day-to-day battles and other military details of World War II, American Home Front in World War II examines the effect of those battles on the people living in America. From issues of ethnicity to home front organizations, this three-volume set explores the complexity of this often-overlooked aspect of the war.

American Home Front in World War II: Almanac discusses major events on the home front, including the changing role of women, Civil Defense and the draft.