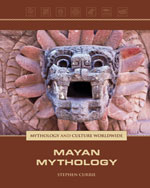 This new volume in Lucent's Mythology and Culture Worldwide series looks at the mythology of the Mayan culture, and explains how the beliefs, values, and experiences of that culture are represented in its treasured stories. Topics covered include creation stories, myths of culture heroes such as the Hero Twins, and tales of the gods of maize, rain, and wind, as well as the malevolent spirits of the underworld, Xilbaba. This volume has a map of the Mayan civilization, a genealogy grid for the Hero Twins, a table of major characters with name pronunciations and brief descriptions, a glossary, sidebars, fact boxes, a bibliography of sources for further study, and a subject index.