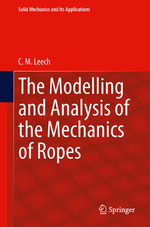 The Modelling and Analysis of the Mechanics of Ropes, 1st Edition

This book considers the modelling and analysis of the many types of ropes, linear fibre assemblies. The construction of these structures is very diverse and in the work these are considered from the modelling point of view. As well as the conventional twisted structures, braid and plaited structures and parallel assemblies are modelled and analysed, first for their assembly and secondly for their mechanical behaviour. Also since the components are assemblies of components, fibres into yarns, into strands, and into ropes the hierarchical nature of the construction is considered.The focus of the modelling is essentially toward load extension behaviour but there is reference to bending of ropes, encompassed by the two extremes, no slip between the components and zero friction resistance to component slip. Friction in ropes is considered both between the rope components, sliding, sawing and scissoring, and within the components, dilation and distortion, these latter modes being used to model component set, the phenomenon instrumental in rope proofing. The exploitation of the modelling is closed by the suggested modelling and analysis of component wear and life limitation and also of rope steady state heating. These will require extensive experimentation to extract the necessary coefficients, achievable by parallel testing of prototypes and similar structures.This development is focused on the modelling and analysis of ropes and other similar structures. All the modelling is based on the Principle of Virtual Work and admissible modes of deformation. Finally this book is directed towards the various industries involved in design, manufacture and use of ropes, stays and other similar structures.