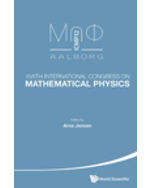 The International Congress on Mathematical Physics is a major conference in its field that attracts a very wide spectrum of researchers. Held every three years, it provides an overview of recent developments and achievements in mathematical physics. This volume presents the plenary lectures and invited topical session lectures from the XVIIth ICMP, which was held in Aalborg, Denmark, August 2012. It also includes additional material from the Congress.In this volume, one can find survey lectures on orthogonal polynomials, random systems, information theory in physics, several aspects of quantum field theory and quantum mechanics, general relativity, and classical and quantum dynamical systems.The topical sessions covered the following areas:Dynamical systems, classical and quantumEquilibrium and non-equilibrium statistical mechanicsPDE and general relativityStochastic models and probabilityOperator algebras, exactly solvable modelsQuantum mechanics and spectral theoryQuantum information and computationQuantum many-body theory and condensed matter physicsQuantum field theoryString theory and quantum gravityReaders are exposed to state-of-the-art views on mathematical physics. Several of the plenary lectures give broad surveys on recent activities, for example, in orthogonal polynomials, PDE in mathematical physics, and information theory in physics.