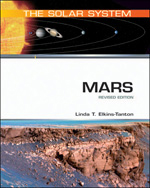 MARS exploration has never been more active, and our understanding of the planet is advancing rapidly. New discoveries reveal gullies carved by recent groundwater flow, thick ice deposits protected by rocks and soil even at the equator, and new evidence for lakes and seas in Mars' past. The Martian surface has some of the oldest planetary crust in the solar system, containing clues to conditions in early planets that cannot be obtained elsewhere.Beginning with a discussion of Mars as a planet in orbit, MARS, Revised Edition covers fundamental facts about this planet, including its mass and size, its seasons and surface effects on the planet, and theories on how the severity of its seasons have changed over time. Featuring up-to-date information and new research, this new, full-color book explores what is known and inferred about the composition and structure of this planet's interior—including theories of planetary formation—as well as discussions of weather, surface conditions, and surface features. The recovery of the Mars program and its new structure are also described in this insightful resource.