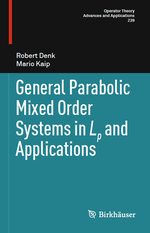 In this text, a theory for general linear parabolic partial differential equations is established which covers equations with inhomogeneous symbol structure as well as mixed-order systems. Typical applications include several variants of the Stokes system and free boundary value problems. We show well-posedness in Lp-Lq-Sobolev spaces in time and space for the linear problems (i.e., maximal regularity) which is the key step for the treatment of nonlinear problems. The theory is based on the concept of the Newton polygon and can cover equations which are not accessible by standard methods as, e.g., semigroup theory. Results are obtained in different types of non-integer Lp-Sobolev spaces as Besov spaces, Bessel potential spaces, and Triebel–Lizorkin spaces. The last-mentioned class appears in a natural way as traces of Lp-Lq-Sobolev spaces. We also present a selection of applications in the whole space and on half-spaces. Among others, we prove well-posedness of the linearizations of the generalized thermoelastic plate equation, the two-phase Navier–Stokes equations with Boussinesq–Scriven surface, and the Lp-Lq two-phase Stefan problem with Gibbs–Thomson correction.​