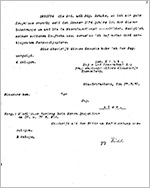 Generaloberst Hans von Seeckt (1866-1936) was Chief of Staff of Field Marshal von Mackensen's army group in World War I. In that capacity he had a leading part in planning the Central Powers' breakthrough of the Russian front in 1915 and the conquest of Serbia in the latter part of that year. At various times he served on military missions to Turkey and China. After World War I, as military head of the Reichswehr, he was considered the organizer and "father" of the army of the German Republic. This collection of von Seeckt's private and official papers consists, in general, of correspondence, reports, diaries, draft articles, newspaper clippings, maps, and some genealogical materials. Topics range from von Seeckt's ancestral background, through his educational and army career, his travels abroad, his part in World War I, and his service as head of the Reichswehr to his membership on the joint Anglo-German-French Mixed Committee on war graves and his death in 1936.