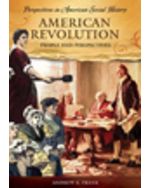 Moving beyond traditional texts, this revealing volume explores the world of the average citizens who played an integral part in the Revolutionary era of American history. History books are filled with the words and exploits of America's founding fathers: Washington, Jefferson, Adams, Franklin, and Madison. But what about the farmers and slaves? The women and children? What of those citizens who opposed independence? This comprehensive work reveals that they all had their own distinctive parts to play in the emergence of the United States.

American Revolution features the work of 14 accomplished social historians, whose findings are adding new dimensions to our understanding of the Revolutionary era. But some of the most fascinating contributions to this volume come from the people themselves - the anecdotes, letters, diaries, journalism, and other documents that convey the experiences of the full spectrum of American society in the mid- to late-18th century (including women, African Americans, Native Americans, immigrants, soldiers, children, laborers, Quakers, sailors, and farmers).