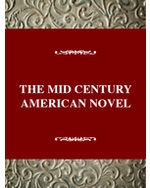 From the heart of the Great Depression to the turbulent 1960s, the mid-century in America was a vibrant literary era. Linda Wagner-Martin's comprehensive study encompasses the "political literature" that flourished in the 1930s, the beat movement of the 1950s, and the multicultural literature of the 1960s. Wagner-Martin includes in her critical consideration African-American women writers, Jewish writers, and gay and lesbian writers who have been unjustly forgotten in earlier assessments of this period. The inclusion of popular writers in such genres as detective fiction also adds to the depth of this study.