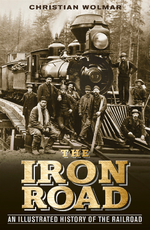 The Iron Road is full of wondrous curiosities. Did you know that early trains in Australia were pulled by convicts, or that elephants were until recently used to shunt freight wagons in India? The world's most magnificent railway station, the Chhatrapati Shivaji terminal in Mumbai, took 10 years to build. The longest possible continuous railway journey in the world is the 10,600 miles between Algeciras in Spain and Ho Chi Minh City in Vietnam. And the idea that Mussolini made the trains run on time is a myth. No invention, not even the Internet, has ever transformed the way the world traveled, worked, thought, fought, ate, drank, made love--you name it--the way the train did. From the historic moment in September 1830 when the first train chuffed between Liverpool and Manchester, UK, there was a race to lay down tracks across the planet. Adventurers, visionaries, and rogues were attracted to grandiose projects linking distant corners of the globe in a quest for wealth, power, and national unity. The achievements were heroic: India's railway network was the biggest public works project since the building of the pyramids. But the human costs were huge. In the 1850s, six thousand workers died during the construction of the Panama railway, the world's first transcontinental line--120 for each mile of railroad. The cadavers were pickled and sold to medical schools around the world to defray costs. But for the shareholders, there were fortunes to be made, and at their peak, the railroads represented luxury almost beyond belief. The Iron Road tells of great invention, grand vision, mind-boggling engineering, military strategy, colonial ambition, groundbreaking trade changes, and social impact--all the ways that railroads utterly changed the world in which we live.