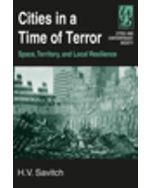 Cities in a Time of Terror, 1st Edition

This book is about urban terror - its meaning, its ramifications, and its impact on city life. Written by a well-known expert in the field, "Cities in a Time of Terror" draws on data from more than a thousand cities across the globe and traces the evolution of urban terrorism between 1968 and 2006. It explains what kinds of cities have become prime targets, why terrorism has become increasingly lethal, and how its inspiration has changed from secular to religious.The author describes urban terrorism as an attempt to use the city's own strength against itself, forcing it to implode, and delineates three basic logics of terrorist choices for targeting cities. The book also includes a discussion of local resilience - the city's capacity to bounce back from attack - and suggests how that can be sustained. Examples from New York, London, Jerusalem, Istanbul, Moscow, Paris, and Madrid illustrate the book's central themes.