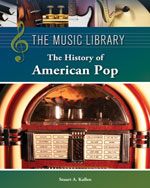 For many people, popular music provides a soundtrack to their lives by entwining emotion with experience. It is little wonder, then, that eventful periods in American history are often defined by the pop music of the time. For example, big band jazz evokes memories of World War II for those who lived through that era, while songs from the 1960s often remind baby boomers of the drug-fueled hippie revolution. In this new addition to the Music Library, author Stuart Kallen traces the history of popular music in America from the sounds of Tin Pan Alley to Chicago jazz clubs, to southern rock n' roll and country, to the British Invasion, to psychedelic rock and Woodstock, to garage band heroes and music video rock stars, to hip-hop tycoons and young American idols.