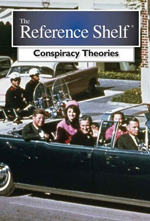 The expression "conspiracy theory" is used by scholars and in popular culture to identify secret military, banking, or political actions aimed at "stealing" power, money, or freedom, from "the people." Less illustrious uses refer to folklore and urban legend. Sometimes the expression is used to characterize a form of speculation as ridiculous, outlandish or irrational. This Reference Shelf examines a number of well-known conspiracy theories, their sources, effects and credibility.