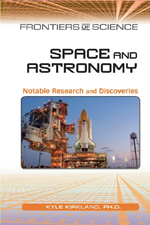 Some daring explorers like to study distant frontiers by venturing out into them, but others prefer to study them by bringing them, or representative samples, a little closer to the lab. Both options are pursued in the fields of SPACE AND ASTRONOMY. Space exploration and astronomy are intricately linked and are examined in-depth in this guide. Dedicated to the scientists who explore the frontiers of space and astronomy—and the results of their unfamiliar findings—each chapter in Space and Astronomy explores one of the frontiers of this science. The development of technology, such as rocket propulsion or orbiting telescopes, is critical in both fields, so this features prominently throughout this comprehensive volume. Science reports on space and astronomy are also explored.