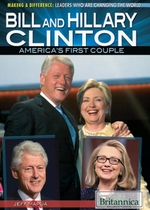 Few political figures are as polarizing as Bill and Hillary Clinton. This power couple has generated fiercely mixed reactions since their first appearance on the political stage. A new Clinton era may be dawning, as Hillary again tests the waters for a presidential bid. Uncovering all the layers of myth, rumor, spin, and talk-radio takedowns, this examination is clear-eyed and calm, objectively reviewing the origins, rise, near fall, and reemergence of the world's most influential couple. It is a fascinating tale of hard work, ambition, idealism and calculation, political might and human weakness and, ultimately, the enduring strength of family.

Front Cover.
Title Page.
Copyright Page.
Contents.
Introduction.
1: Meet the Clintons.
2: Leaders of the Free World.
3: Four More Years.
4: Beyond the White House.
5: Timeline of Achievements.
6: Other Leaders who Have Made a Difference.
Glossary.
For More Information.
Index.