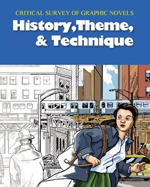 This one-volume work contains over 65 essays covering themes and concepts of graphic novels, including genres, time periods, foreign-language traditions, social relevance, and craftsmanship such as penciling and inking.