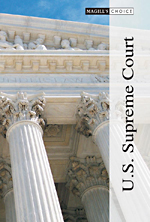 Magill's Choice: The U.S. Supreme Court is an affordable, comprehensive and up-to-date survey of the history and functions of the Supreme Court. There are articles on all the Justices, including those appointed by George W. Bush, articles on key constitutional issues and more than 110 on landmark cases. Well-organized and clearly written, this title offers the additional advantage of coming out at a time when the Supreme Court itself is undergoing important changes that need to be explained. Covered here are issues such as the Court responding to the aftermath of 9/11, the complications of the 2000 presidential election, U.S. involvement in Iraq and the replacement of two justices, including the chief justice. The U.S. Supreme Court contains essays on types of law (such as administrative law, bankruptcy law, and state constitutions), individual pieces of legislation, and clauses and amendments to the U.S. Constitution.