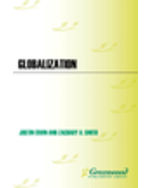 "Globalization" has become such a buzzword that it is easy to forget just how pervasive and multifaceted it is. Information, communication, and transportation technologies have truly made the planet smaller, shrinking the space between cultures in a way that has profoundly impacted not only the world’s economy, but its environment and security as well. Have the changes had a positive impact? What does the future hold?

Globalization: A Reference Handbook goes beyond the typical focus on multinational corporations and the wired world to explore the full scope of a process that actually began well before the dawn of the Digital Age.

This timely, highly informative resource describes the development of globalization, especially in the era from World War II to the present, covering not only its economic aspects, but crucial, interrelated environmental and security issues as well. Rather than limit itself to one interpretation, the book offers an unbiased review of the definitions and assessments of globalization from various points of view, serving readers as an authoritative introduction to what scholars and activists across the political spectrum think about the central phenomenon of our time.