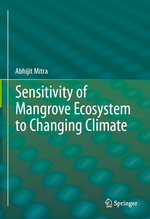 Mangroves are salt-tolerant forest ecosystems found mainly in tropical and sub-tropical inter-tidal regions. Until the 1960s, mangroves were largely viewed as "economically unproductive areas" and were destroyed for reclaiming land for various economic and commercial activities. Gradually, the economic and ecological benefits of mangroves have become visible and their importance is now well appreciated. Today, mangroves are observed in about 30 countries in tropical subtropical regions covering an area of about 99,300 km2. However, during the past 50 years, more than 50% of the mangrove cover has been lost, mainly due to the increased pressure of human activities such as shrimp farming and agriculture, forestry, salt extraction, urban development, tourist development and infrastructure. Also, dam on rivers, contamination of sea waters caused by heavy metals, oil spills, pesticides and other products etc., have been found to be responsible for the decline of mangroves. Although the temperature effect on growth and species diversity is not known, sea-level rise may pose a serious threat to these ecosystems The present book addresses these important issues in separate chapters with some interesting case studies whose data may serve as pathfinder for future researchers of the influence of climate change on mangrove ecosystem. The role of mangroves in bioremediation is a unique feather in the crown of this coastal and brackishwater vegetation that may be taken up by the coastal industries to maintain the health of ambient environment. This book seeks to discover and assess the vulnerability of climate change on mangrove flora and fauna, their role in carbon sequestration and interesting case studies that may serve as the basis of future climate-related policies.