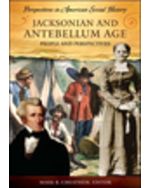 Known as "the age of the common man," the Jacksonian era saw a tremendous increase in the interest of ordinary citizens in the political affairs of the nation. As president, Andrew Jackson symbolized this egalitarianism even as he sought to extend both the power of his own office and the power of the federal government over the states.

Jacksonian and Antebellum Age: People and Perspectives spans the "age of the common man" by focusing on the everyday citizens who helped drive the big social changes of the times -- or were simply caught up in them. The coverage takes readers into the lives of the frontiersmen, townspeople, women, children, religious groups, abolitionists, slaves, slave traders, and others who effected, and were affected by, the history of those times.

Jacksonian and Antebellum Age explores a pivotal era in American history, a time that saw the return of the two-party system, heightened voter turnout, and the gathering of the abolitionist movement. As this volume demonstrates, no study of these defining events is complete without understanding how they were shaped by the country’s least celebrated citizens.